Last Sunday evening I was on the crosstown bus coming home from a meeting. I left early to have dinner with the family. I wondered if Emma would be coming home on the same bus. And, alas, three stops later she got on, exhausted from a full day of rehearsal. She nabbed a seat behind me, and I turned to chat.

“You wouldn’t believe my day,” she said.

“Tell me about it,” I respond.

“That must have been so hard.” I said as if I was just at a meeting of therapists, which I was.

“YEAH, it was hard. I could barely do it. I had to force myself. I just want some dinner and go to bed,” she said in a small voice.

“Shall we get off and get sushi?” This was as much for me as it was for her.

“I’ll call Daddy and tell him to meet me at the restaurant. “

I know she was tired since she rarely calls me mommy anymore. After all she is a 15-year-old.

So we quickly got off the bus and crossed the street to our favorite neighborhood sushi joint, Green Bay. We just sat down when I realized I didn’t have my light backpack, the kind made of nylon and string. I ball it up in my pocketbook just in case I need an extra bag.   It had a dress and a pair of reading glasses I had purchased before the meeting. In addition it had a professional paper my friend wrote. I had comments written on the half I had read.

As soon as I noticed it was missing, I asked Emma to order for us and I ran to the end of the bus line, certain I could make it to enter the bus before it returned to its route. However there were too many buses parked, and while I asked the three buses to search for the bag, my bus turned the corner and it was gone.

I walked back to the restaurant defeated from losing the bag. I was grateful it wasn’t my pocketbook. Everything could be replaced. Even so, when we got home I started making phone calls until I reached the depot. I called three times that night and three times the next day, each time I was told, “Call again, you never know.”

Then on Tuesday I received a cryptic email. “Did you lose a bag?” was the subject line from an email I didn’t recognize. My first thought was that it was SPAM and I was going to corrupt my iMac. Then, I thought, why that question? I can be so suspicious. So, I returned the email. It was from the wife of a mechanic at the MTA. I emailed back with the contents of the bag. She told me that her husband was servicing the bus and found the bag. We arranged for me to meet him at the depot and pick it up.

I debated how much to tip him since I got the dress and glasses on sale, so I didn’t spend a lot. On the other hand, he and his wife went out of their way to find me. Thank goodness I recycle the paper I use. I printed my friends article on the other side of comments I received from my writing class. Because of that, luckily one of the sheets had my email address on it.  His wife worked to find my contact information.  So, it was more about thanking them than it was the value of the contents. Lucy and I walked to the depot, I called the mechanic from my phone when we were out front. And, he came down and handed me the bag. He had to get permission to come down. He refused to take the money. And, before I could insist, he went back to work. On the sidewalk, was a driver waiting for a passenger who had left his phone on the bus. He said, this happens all the time and they do their best to return passengers’ property.

I never caught the mechanic’s name. But I am amazed that he wanted to do a kindness because he thought it was the right thing. And, it’s great that bus drivers and MTA works have a culture of helping others. We are quick to complain, but there is a secret conspiracy of kindness, and I’m happy to say I am a recent victim. 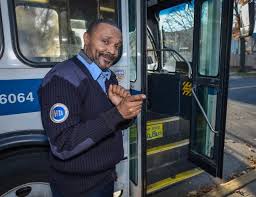